What Determines Which Friends’ Photos Show Up On Your Facebook Timeline?

Kite Media decided to take a deeper look and we found a few surprising factors that contribute to why you will see certain friends’ photos show up more often in your friends picture box on your profile. Facebook’s algorithm looks at a lot of factors to determine which friends appear first. These factors include: 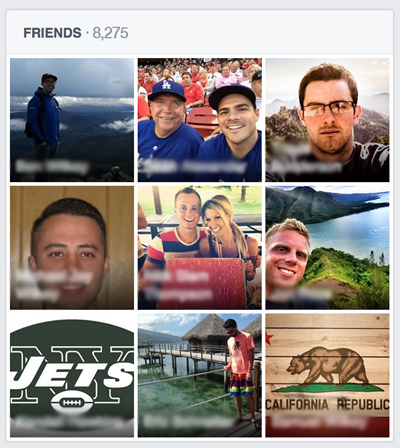 It’s safe to say that if a friend’s photo is showing up on your timeline, but you haven’t had any recent Facebook interaction with them, then, yes, that person has probably been spending a hefty amount of time looking at your profile.

YES – these are the people that Facebook stalk you! (to some extent). The pictures vary, but it seems like the same people are generally appearing there on a regular basis. I have always wondered why those regulars always show up – do they look at my timeline a lot, do I look at their timelines, am I tagged in photos with those people, have I messaged any of them recently? – the answer to these questions varied for each person, but these seem like the most logical reasons as to why these peoples’ profile photos always appear on my timeline.

My belief has always been that these are the people that look at my page the most. Mainly, because most of the people on my timeline are friends whose profiles I haven’t viewed for months. With a little Google research I was able to find a legitimate explanation on GotKnowHow.com. Here it is:

The 9 friends shown in your Facebook Timeline friends box are determined by a number of factors, but mostly they will show friends that you appear to be closer with from interactions on Facebook. These 9 friends may be your closest friends, family members, crushes, Facebook stalkers or just friends that have recently viewed your profile. While the friends box will still show some random friends every so often as well, most of the time the larger percentage of friends will be those who you are connected closer with as determined by Facebook’s friend algorithm.

While these 9 friend pics do seem to change frequently, and still have around 2 random friends showing up to mix things up, overall your friends who show up in your 9 friends list box, are much more likely to be “connected” to you on some level, whether directly or indirectly, as compared to your other friends who don’t show up very often.

Keep in mind, because everyone has different friends, a different number of friends and different types of relationships, everyone will have a slightly different reason as to why certain people show up in their friends box. Facebook is always tweaking its algorithm that determines these factors, so the reason why certain friends show up may always be changing slightly. But at the end of the day there are definitely a number of key factors that go into Facebook’s top secret friend algorithm that determines why certain friends photos show up in the 9 friends box at the top your Facebook timeline profile. And more than likely it’s because they are your best friends, closest friends, family members, boyfriend, girlfriend, your Facebook crushes, Facebook stalkers, and likely they are ultimately individuals that have recently interacted with you on Facebook in one way or another.